Emergence in Robotics, or how a lot of small robots can create something bigger 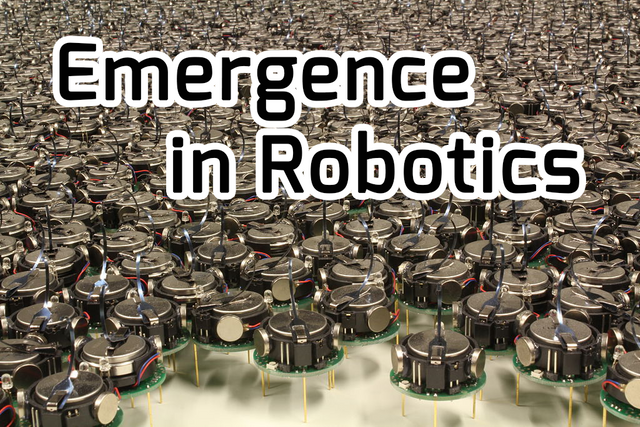 Some time ago I came across this video from Kurzgezagt – In a Nutshell about the emergence in the living world :

If you don’t know this YouTube channel yet I recommend you to go see their videos, in addition to being very elaborate and having beautiful illustrations they allow you to ask yourself questions on a whole bunch of subjects. Here are some that I find particularly interesting: Optimistic Nihilism, A New History for Humanity, The Fermi Paradox, What are you ?

There is a sentence in the video that sums up the idea of emergence very well: “Emergence is complexity arising from simplicity”. This means that a new character (in the sense of a new function, a new capacity) appears when we add a lot of the same element, colonies of ants, cells, society are examples, the result is not necessarily”equal” to the sum of the entities forming it.

An example of emergence in robotics :

It was after observing this behavior in nature that researchers began to try to reproduce it using robots. Called Kilobots, these robots are the products of a study conducted at Harvard University, whose goal is to create a colony of robots acting as a biological organism, in a distributed manner, to create two-dimensional shapes that are sent to them. Researchers are trying to reproduce behaviors such as those observed in fire ants swarm that can cling together to form a raft to float in the event of flooding or cells that make up an organism.

The swarm is composed of 1024 identical robots, these were conceived to be the least expensive possible, because each additional expense for a component is multiplied by 1024 on a whole swarm. So they had to be inventive to find the least expensive solutions possible, that’s why robots are equipped with :

All arranged in a robot of barely 33mm in diameter and 34mm high and at a relatively low cost, about $15 if you use the schemas that the research team has published (direct link, this content is under CC BY-NC-SA 3.0 license). And are now sold by the company K-Team based in Switzerland.

These robots have an autonomy of 2.5 hours with the engines running and 3 months in standby. They are recharged using a charger composed of 2 metal bars on which one comes to deposit about ten robots, these two bars apply a voltage of 6V between one of the legs and the hook located above the robot, this system makes it possible not to waste time to connect a cable on each of the robots. If the autonomy is so high (for such a small robot) it is because robots are very slow and that on most videos we can find their movements are accelerated.

And thanks to a particular attention to all these details each robot does not require much attention, thus allowing to work with a large number of them.

How does it work ?

To start you need to place 4 robots (called “seeds”) on the board in order to define an origin point, they must be next to each other and form a sort of diamond. Then we will send the program to the colony thanks to the OHC (for Over Head Controller), which is a programmable card connected by USB to a computer and communicating using infrared leds with all the robots of the colony that have placed under this device. The OHC can also be used to individually control each robot as well as turn all robots on or off at once using software developed by the researchers.

Then the robots on the sides of the previous form will begin to go around to reach the point of origin and place themselves around it. As the robots move, the image is created on the board to finally reproduce the given image. We can see the result of different forms on YouTube, here is an example :

The algorithm includes features to detect and repair certain errors in the realized form and make the robots cooperate in order to repair it.

The potential uses of this algorithm for robot swarms are the search for survivors in the rubble of collapsed buildings or in places with dangers for humans, ocean cleaning operations or it could be found in the algorithms of tomorrow’s autonomous cars. We can still imagine using this knowledge to control swarms of drones like the one we saw at the opening ceremony of the 2018 Olympic Winter Games (starting at 1:55):

And maybe one day, who knows, a team will create a colony of robots capable of the same exploits as”Microbot” in the movie Big Hero 6 (I unfortunately did not find a video to illustrate it).

Sources and links to go deeper :

This is a demo store for testing purposes — no orders shall be fulfilled. Dismiss