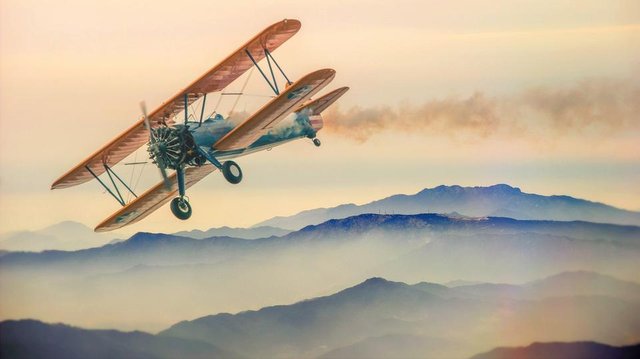 The first topic that will be addressed in this series (click here to learn more) is how an aircraft is able to fly, the word aircraft includes all flying machines (both aerodynes, those that are heavier than air, and aerostats, those that are lighter). We will say a quick word about some techniques used by aerostats before spending a little more time on the functioning of an airplane wing for the aerodyne part.

The most popular example of an aerostat is certainly the hot-air balloon:

« Any object, wholly or partially immersed in a fluid, is buoyed up by a force equal to the weight of the fluid displaced by the object. » Source : Wikipedia

Concerning our hot-air balloon, the red rectangle would correspond to the hot air contained in the balloon and the blue rectangle to the ambient air, colder. And if the buoyancy is capable of “lifting” a hot-air balloon and its passengers, it is due to the decrease in the density of the air as it is heated. Indeed, the air density can be calculated using this formula :

And if you wonder why I mentioned it, it is because hot-air balloons are the first functional flying machines that Man built, the first “manned” flight having taken place on October 19, 1783 (https://en.wikipedia.org/wiki/Hot_air_balloon#History) (even if the principle of operation is used since the 3rd century BC in the form of Chinese celestial lantern).

For the second category of aircraft, we will focus on airplanes and in particular their wings. When an aircraft flies, the forces it is subjected to can be represented using 4 of them: weight, lift, traction and drag.

The force that we know the best is the weight: P=mg* where P is the weight in Newton (N), m the mass in kilograms (kg) and g the acceleration of gravity in m/s² (and which is 9.81 m/s² on Earth). The result is used for a first approximation of the lift required for the aircraft to glide.

The other forces are a little less known to the ” general public ” and before going into numerical details we will see how they are created.

How a wing works:

There is an experiment that is often done to demonstrate what I just said: take an A4 sheet and hold it by the corners at one end, let the other side fall and blow about 2 cm above the end you are holding. All it takes is a thin stream of air for the leaf to lift and you’ve just created a lift!

On a wing, it is the same except that it is the air that meets the wing (we speak of airspeed or true speed to know the speed of the aircraft compared to the surrounding air, as opposed to the ground speed, which would be the speed that a GPS would give for example). The curve, as well as the angle of the wing, make it possible for air which circulates above the wing to travel more or less distance.

To illustrate this phenomenon I looked for a funny way that the diagrams you can find on the internet, inspired by what Mark Rober does on his Youtube channel, I decided to 3D print a wing profile (a kind of wing section) found on Wikipedia. To which I gave some volume on Fusion360 (there will be a more detailed article about 3D design later) and to use pasta to represent the airflows (how it should not be played with food?) and to animate the whole. It is not the most precise solution but it works well (and promised there was no waste ^^).

So we have our roughly calm air stream moving this way:

If we place the wing profile in the middle it will start to deflect the flow in 2 parts to create a lift. Then we increase more and more the angle between the air flow and the profile string (the line that connects the leading edge of the wing to the trailing edge) until the flow will detach from the upper surface (the top of the wing) this is called the stall. This can be due to an angle of incidence too high or an airspeed too low and this results in a rapid loss of altitude:

If you want more precise diagrams, don’t hesitate to visit the Wikipedia page (as well as the corresponding pages of the GRC), in addition, there is a lot of interesting information about wing design that I couldn’t talk about in this article.

Unfortunately, the lift is coupled with a force that we would dispense well: the drag.

The drag is a force that tends to slow down the wing, it is created by the change of direction imposed by the wing to the air flow and is perpendicular to the lift (we should call this induced drag force because it is to differentiate from drag due to friction of the air on the wing, but as we will not talk about the latter I will not specify later). It is closely related to the lift as will be seen in the equations below.

And when we add up the drag and lift, we obtain what we call the total aerodynamic force :

And the last force we need is the thrust, created by the means of propulsion of the aircraft, for our example, we are going to take a propeller.

After seeing the lift you can easily guess how propellers work, they are wings that are attached to the shaft of an engine so the rotation creates the relative wind needed to get the lift. Propellers can be compared to screws that would screw into the air (but as the air is not very dense the propellers must rotate very fast to create a strong enough traction to reach the required speed).

When designing the propellers it is also necessary to pay attention to the angle of the blades to vary the pitch of the propeller (the distance covered in a revolution), on many planes this angle is fixed but on some it is possible to change it for better yields (the faster one goes the higher one will be able to pitch).

The balance of forces and the equations :

To finish this part about aerodynes some equations for your greatest pleasure!

We have therefore already seen the weight at the beginning of the article : P = m*g with g=9.81m/s² and m the mass in kg

For drag the equation is the same to a coefficient: Rx = 1/2 * ρ * S * V² * Cx with Cx the drag coefficient without a unit (which depends on the shape and inclination of the wing too)

There are several versions, the one from which I get these screenshots is named : FoilSim III Elementary Vers.1.1 (you will probably need to use Internet Explorer and add the page in the “trusted sites” in the “Internet Options” menu to activate the Java application to make it work)

We notice for example that if we increase the camber or the angle, the lift increases. The goal is, therefore, to compensate the drag by traction and the weight by lift so that the plane is in equilibrium (this means that it is either stationary or that it has zero acceleration).

What about the drone?

The drone is a quadcopter, 4 propellers with 2 engines that rotate clockwise and the other 2 in the other direction to be able to rotate on itself. So we have the lift and the drag that merge. And we can move by varying the speed of the engines.

And I tried to film the way the drone sucks in air using smoke and the “Slow motion” option of an iPhone, but I’ve had a hard time getting the right conditions to see what’s going on and the result is not as visible as I’d hoped:

Before leaving you I wanted to show you a very surprising technique to create this famous lift. Veristasium explains it very well in his video:

And some people even had fun trying to make a remote-controlled plane using this effect:

If you have any questions, suggestions or metaphysical reflections, feel free to share them in comments!

For this article I mainly used my knowledge acquired during the high school physics courses as well as during the courses of preparation for the BIA (a French aviation initiation certificate), and the theoretical exam of pilot of ULM (Ultra-light motorized) which I checked thanks to the following pages and websites :

All photos without sources were either taken or created by me.

This is a demo store for testing purposes — no orders shall be fulfilled. Dismiss